Like many commuters, I listen to the radio a lot. Something hit me about the way they introduce new songs. The disc jockeys talk about the fact that a new song is coming up, and if we know the artist, they'll mention another song by this artist to jog our memories. If it's an artist they think we may never have heard of, they might say something by way of introduction, something to locate the new music somewhere in our minds, prepare us in a positive way.

Most of the songs on the radio are in heavy rotation, and they phase them in and out like this, with an occasional familiar oldie. These people know what they are doing. Why would they bother doing all this?

And I thought of this thing that happened right around the time in the middle of the eighties when I was getting myself kicked in and out of high school. It was an enormously big deal, and folks my age will remember, and I'll tell you what happened in case you are younger.

Coca-Cola tried to change its flavor to become "new and improved" and this was treated like a National Disaster. I am serious, people were really flipping out about this, and it was all over the news, for some time. It was a major topic of conversation. There was high emotion. Even Bill Cosby was somehow involved, but I don't remember his exact role, just that it was A Thing, because of his standing in the community.

At this time in my life, I believed I was not a human being, not the same thing as a person. But I was just now having this reverie about how everyone else reacts to change...

And here is another thing: people often see the sensory accommodations in my office and ask if I can help them brainstorm getting the whole workplace to be more like my office.

People often read my writing on things like rushing and social and emotional confusion or distress and say they can really relate to it even though they are not autistic.

People often hear ideas of what can help kids like me handle executive functioning difficulties in the classroom, and declare, "I am going to try that for myself!"

Instead of not being human, what if I am very human, so outrageously human that it sometimes rises to the level of impairment? What if it is really that the things I cannot function without are things that would make everyone function better? My sine qua non might be every one else's sine qua shouldn't have to.

This is my entry for the Love Not Fear Flashblog. In case you are clicking from TGN directly, here is a link to the flashblog site itself, where you can read lots of others, and get yourself very happy: HERE IS THAT LINK. What I love about this is that it's organized by a loving group of people, some of whose kids are Autistic; and some of the people are Autistic themselves, and some are not, and some of them have no kids. Just a bunch of love bringing us together. 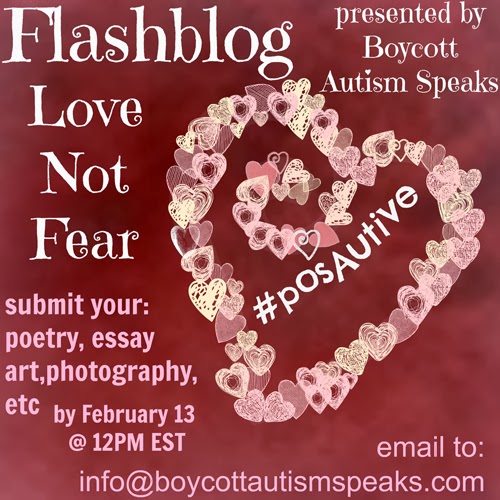 [Image: Flashblog logo of a pink and white heart made out of lacy smaller hearts with #PosAutive in it. It says, Flashblog: Love Not Fear, presented by Boycott Autism Speaks, and cites a deadline, for which I am late, of course.]

Lately I have been having a lot of trouble writing, so I will tell a story of Love winning out over Fear, in pictures.

One day a bit ago, we were having an action where we were supposed to take a picture of ourselves with a sign saying something like "I am not afraid to say I am Autistic." This was because something was making the fearmongers smear our name again, as usual, nothing really different. And I support these actions, but I have this thing of being rather precise. So, I couldn't lie. I do say it freely: I am Autistic; however, I don't say it without trepidation, especially when one of these media scarymovie frenzies is going on. This is the picture I made: 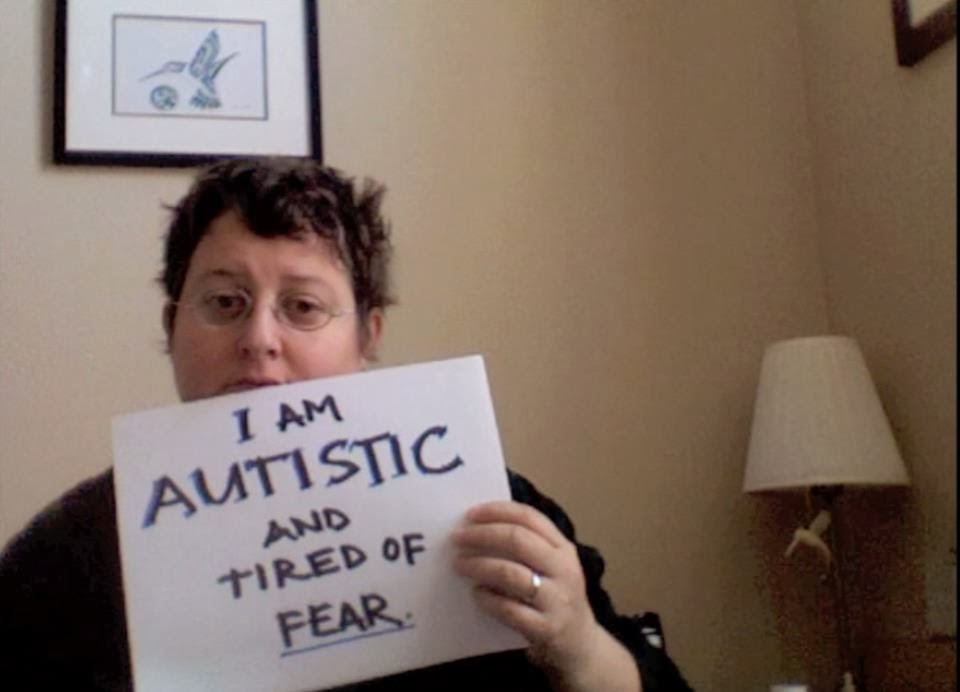 [Here is a webcam picture of me sitting on the bed, holding a hand-lettered sign. The sign says: I AM AUTISTIC AND TIRED OF FEAR.]

The boys were napping and Layenie came in and sat next to me on the bed, having finished what she had been doing really quick. She saw this thing I made and gave me a big, much-needed hug. Then she looked at her Facebook and saw a call for participation in another action that our people who love us were taking in support, having to do with This Is Autism. Layenie immediately made this: 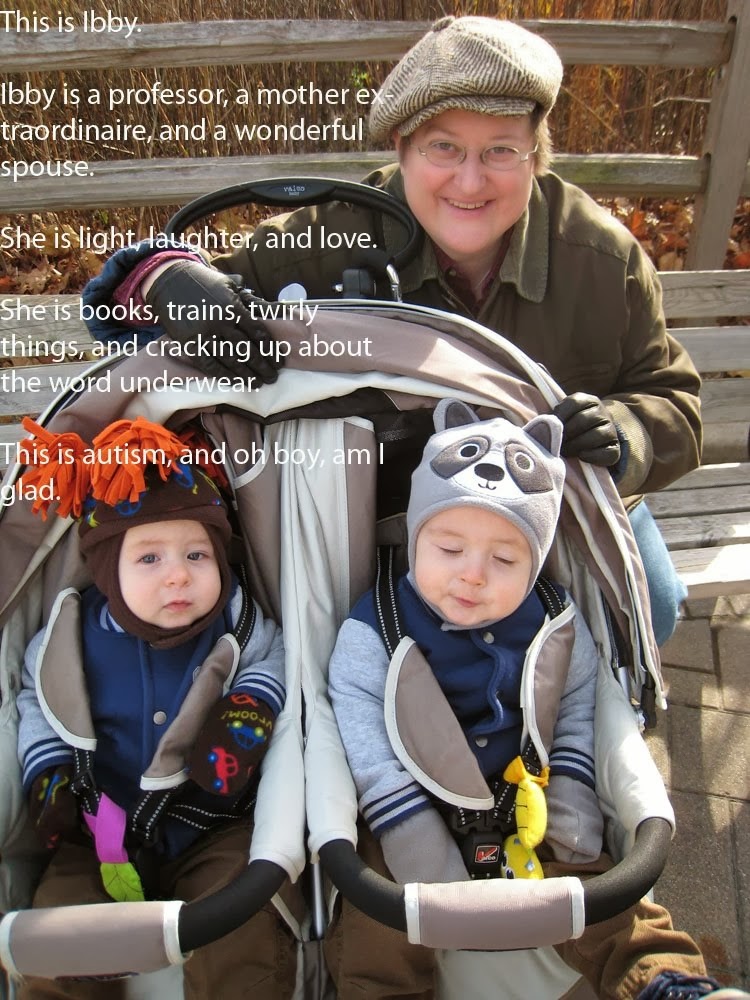 [Layenie's pic here is of me with the twin boys, age about one, in the transition from baby to toddler. She has inscribed the picture with these words: "This is Ibby. Ibby is a professor, a mother extraordinaire, and a wonderful spouse. She is light, laughter, and love. She is books, trains, twirly things, and cracking up about the word underwear. This is autism, and oh boy, am I glad."]

In a cage match between love and fear, love wins.

Fear can come back as much as it wants. For me, in my experience of my self, I know it will.

But I also know love wins. 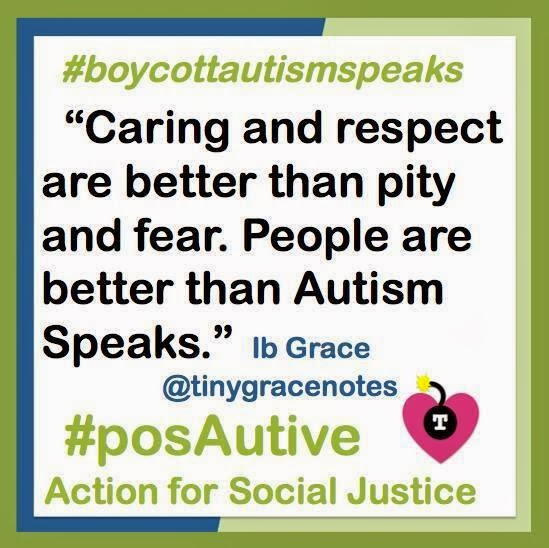 Love is better than anything.

On What A Bad Idea Rushing Is...

I am still working on the stuff about ABA, which takes forever, and it is taking even longer than I meant for it to take, because I am trying to rush myself.

Which reminded me, I forgot to link to this article I wrote for We Are Like Your Child, about what a bad idea rushing is.

Here's the link: Please Don't Rush Me, on We Are Like Your Child.

Thanks for hanging in there with me, and much love to you all. Nobody other than my own self is trying to rush me in this instance: You all win! xx