Crossing The Street With Neither Guard Nor Signal

So I have what should be a really simple question to answer, and yet...maybe not.

It's about crossing a busy crosswalk without adult assistance. My 12-year-old son just started middle school; to get him there, I drop him off at a busy corner with a crosswalk. Only difference from elementary school is that there's no crossing guard.

This morning, he was the only one in the crosswalk, and with my "cross safely" ringing in his ears he...stopped. Waited for the cars there to go. They waited for him. The drivers started waving him across. But he, of course, was not looking at the drivers. He was just waiting. Honking started. I finally rolled down the window and said, "OK, go ahead, safe to cross!" And he, without looking first to be sure nothing had changed while I said that, darted across. Something about the whole thing worried me.

My question then: How do I teach him to look INSIDE the cars to see if the driver sees him, if the driver is waving him on, if the driver is NOT seeing him and is about to drive forward, etc.? This is going to come up when he starts to drive, too. Is there a simple way to address this tendency to just think, "the rule is that I can go when there are no cars at the crosswalk" or something like that, and not to adjust depending on the situation? Most mornings, he won't the be only one crossing. But when he is...I need him to be safe, and I can't think of a single simple "rule" he can use; the situation is always different, and I won't always be situated so I can direct him from my own car. Ideas? And THANK YOU. 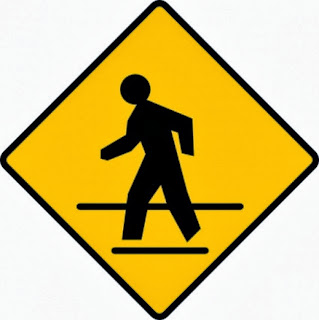 This is a great and useful question that is the opposite of a simple question! You are right! Should be: isn't.

So I wracked my brains trying to remember how I found out about looking inside of the car to see if they can see you and whether they are going to run over you about it, and could not do it by myself. So I called up the person who would have taught this information to me! (This is the key to good research skills, by the way. If you know who knows, it's as good as knowing it yourself.)

My mom said it made total sense to not want to be embarrassing him by being the hand-holdy mother all draped over his business if there are other kids around, but when there are no other kids, this will work better with you not in the car, because he can follow your head with his head and hear your words up close.  You narrate with him what to do, always using the same words, never changing it up.  "Look left, look right, look left again. Are there any cars? Neither side? Safe to cross. A stopped car nearby? Look inside. Can the driver see you? How do you know? Smiling and waving and not going? OK to start. Now look back right. A stopped car? Can he see you?" Etc. In the car on the way there you can do this decision chart. He will know it in his head when he is with the other kids and you can hide and watch from your car to feel better, but he should get it pretty soon and get comfy.

When my mom was telling me about the above I started remembering it, the rhythm of it. As a matter of fact my mom had to get off the phone pretty quick but I suspect she stealthily slipped a bunch of good manners information into these rhythmic safety algorithms. (As you are reading this, Mom, note that I gotcha.) Because I have a dim memory of this being around the time I learned the thank-you wave that I still to this day use while I myself am driving, or when I do have the pedestrian right of way on a crowded urban turn lane and the driver did smile and wave me through, but it is still nice to acknowledge not being run over.

I am a very safe walker and driver now, and polite, and also very good with algorithms such as who goes where on a broken signal light. I am, astonishingly, not the one who gets confused in such situations.

Neither will your son be.  There is a bright side to all of this.  :)

(In other related news: Another thing I have to remember to this day is how to act like I am trying to cross the street instead of trying to randomly loiter in the general vicinity. This is another issue I don't know if he has, but it might be a thing.  Look purposeful about I Am Crossing The Street Just So You Know and the car drivers will be more likely to Take Notice.)

Write back and let me know how it all goes?

O and PS: If this is not quick enough, remember that you can buy time by rousing the neighborhood and agitating for a traffic light.  Let me know if this is something you want to do and I will put you in touch with some people who have done it and know exactly how to make it happen.

Another incredibly self involved person without a moral compass tried killing her kid. This time it didn't work, thank heaven, but members of the media as well as key "parent" bloggers are as usual taking the opportunity to present the grisly, unnatural and horrific acts as somehow logical, to further their complex and spiteful agenda.

They are callously using these troubled criminals, in other words, and calling them "typical parents" doing "understandable acts of desperation" at the expense of real parents everywhere. Don't fall for it, and don't stand for it. Speak out.

Thought experiment: You hear a news report that a promising young high school football player with a scholarship to Notre Dame after graduation was gunned down in cold blood by his mother. It comes out that she had called, even taken time off her minimum wage job so she could try in person, begged at least seven times for more food stamps because Jim's training schedule started making him so hungry she could no longer afford to feed him. They ignored her. She is quoted as saying she saw no way out but to kill him: Julie had known hunger, and vowed her boy never would.

Now. Are we going to be deluged with crap blaming the boy for being inconvenient, or will we be shown a lovely pic of him as a heroic young life cut short?

Will she be painted as society's victim, one of us? Or perhaps...someone who killed her own child: a child-killer. The very worst kind of criminal we can think of. She's poor and the kid was not disabled, so...

I'll stop with that. But you see why I'm so sick. Wrongness is happening on so many levels and not just to Autistics. They are doing this to our parents, and our whole civilization.

Please stand with us and say NO in any way you can think of, every chance you get.

Evil is NOT the typical response to being under resourced. We cannot allow this myth to take hold and dig deeper cultural roots.
In short: we need more resources and that is the truth. But most people would never kill an innocent kid, no matter how hard life is, and to say otherwise is a flat out lie.