Why Do So Many Autistic People Love Trains?

In honor of National Train Day, which is this coming Saturday May 11th, the day before Mother’s Day, I’m going to answer one of my most Frequently Asked Questions (FAQs).  I’m doing this theme now to give everyone a head’s up because National Train Day is only six years old now and not so well known yet.  You don’t want to miss it, because your local train station probably has wonderful free events going on (click here to see if there are Facebook invites).  So this is also a Public Service Announcement (PSA).

Why do so many Autistic people love trains? 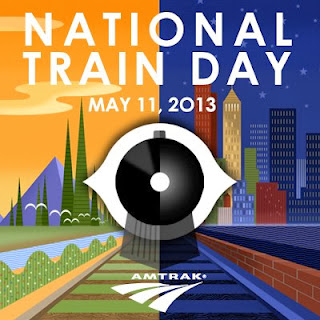 To answer this question, I can speak from the personal standpoint, and also as someone who is well educated and knows a great many other Autistic people who have filled in gaps in my own education.

I have ridden a large number of Amtrak lines and discussed most others in graphic detail with Autistic colleagues as well as having been a passenger on large lines in Belgium, Germany, France, England, Canada and Scotland.  As for commuter trains, I have taken a variety of such in the aforementioned countries, in addition to the USA, including the debut of MAX in Portland, OR, as well as BART, the Metra and Metro, the T, the L, and the good old NYC Subway.  This list is nowhere near exhaustive, but I still do not want to leave out the fabulous EuroStar.

One last thing I will tell you here that I have not written before is that in the 'eighties, I also rode in some boxcars on one of the Union Pacific lines.  I have since found out that the “Piper” we would have to pay upon arrival at some particular bridge we never actually came to cross is not a charming colloquial expression for Conductor on a freight train.   Sorry about that, Union Pacific.  I love you forever.

For all the trains I have ridden, I have watched and discussed many, many more.

And thus can give you my answer:

We love trains because they are excellent, and also awesome.