This morning a thing happened in an asynchronous online thread between two of my friends, and it was this: one of them liked my post answering Devoted Phoenix, which you can click on here, and said so a little enthusiastically maybe, but you know, supportive friend and all... The other friend, who is also super supportive, took this personally, what the first friend said, took it as a kind of indictment against those who do not or cannot exit stage left.

Both of these people are people I've spent a good deal of time with in real life and seen them with their kids so I know they are *absolutely fabulous parents* as well as this: when I say they are my friends I do not mean "acquaintances."  I'm using the term the opposite of loosely.

So I cannot possibly let go the fact that my answer had in it the power to cause this kind of hurt due to the fact that I did not write part of it adequately.

I must fix it.  Important note: 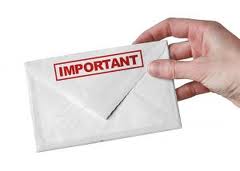 [Photographic image here of a hand holding out an envelope stamped with a giant, red, official-looking seal of the word "IMPORTANT" in all capital letters with a red border. It is not letter-sized, but rather note-sized, the envelope.]


Here are some things I absolutely did not mean under any circumstances.  I did not mean to imply that all the problems that there are would be resolved by doing a geographic and exiting stage left, and by extension I super mega extra did not mean to imply that families for whom this is not an option or the best solution are doing a bad job in some way.  I mean things very, very contextually; in that answer, I was talking about situations like the one being described in the original letter written by DP, which is linked here.

In real life,  it is difficult in many places to get transferred to another school, or granted the ability to homeschool (if you wanted to go for that) and it would be especially difficult if there were no evidence that the school setting itself was part of the problem, or the bulk of the problem.  However, from the evidence in the letter I deduce it will be very easy for DP's family to show (even almost *prove*) that the social scene at this particular school is a Big Giant Issue if not the primary and immediate emergency in her daughter's life right now.

Also if any services are being used that are actually helpful, it is not easy to keep these services going in many states or districts while pursuing other placement options.

What I am very sorry about here is that it seems like I made exit stage left sound like: 1. the solution to everything, which I totally disagree with, because it's simply not true; and 2. it's just ever so easy, which was hurtful to my friend.  The first is pretty embarrassing to me as a writer, but I'm extremely sorry about the second thing.

I exited high school using a technique that is probably very traditional but that I do not recommend. I am going to say a little about it here to try to rectify the pain I caused and also I hope the book comes out soon wherein I have a chapter all about my schooling years, because it details this situation much better.  The book comes out this Fall.  I will let you know.

So: the method that happened for me was extreme truancy because I could not bring myself to go in that place. I would get ready to try every day and I didn't put this in my chapter and I still don't know if my parents know this so it's a new piece of exclusive information for you, TGN readers.  I always took the bus to the correct bus stop for that high school and then took to my heels, even if the places I would ultimately end up that day were several miles away.  Always.  I did try.  But I could not, like I said, get myself in there.  Although sometimes I sat in a tree on the grounds because I did love that tree, from which I could see a fountain.  Anyway.

I became expelled from that high school which is the horribly non-easy method my parents had to deal with, the news of my extreme/complete truancy hitting them out of nowhere as I had not been able to communicate my distress to them properly because I did not have the words.

Then my parents fought very very hard to get me placed in an alternative school. This also was not easy for them.  Any problems I might have had there would *not* have been solved by a geographic because it was a very good placement, so these problems were solved in *other* ways.

I am sorry for the misunderstanding.