Sisters of the Road: What a Charity Should Be

The word ‘charity’ comes from the Latin translation (Caritas) of the Biblical Greek word for one of the kinds of love, Agape. This is the kind of love which does not seek anything in return, a kind of love that moves you to action on behalf of other people’s benefit because you really care about how they are faring. It is not an emotional love that needs things in return, and it certainly is not a greed for your own fame or fortune. Real charitable love, or agape, would never, ever seek to tear down, demean, dehumanize or in any other way harm the people it purported to help. Think about love and think about what I am saying and you might wonder how recipients of really decent charities feel about those charities.  Boycotty? No.

You may have heard a lot about Autism Speaks lately, because of the boycott, because we are so weary of being misused by them, because it is the opposite of a real charity; it is the opposite of what I am talking about when I talk about charitable love. It makes me want to tell you about a place I used to go which was quite exactly what I am talking about, and was such a shining example I can use it to explain the positive aspects in graphic detail.

Allow me to introduce Sisters of the Road Café, in Portland, Oregon.  I was a recipient of their charity long ago and when my fortunes improved I became more of a deliberate volunteer. My dignity and status were the same in both events.  This is important because it is the perfect example of what I mean.

Sisters of the Road does nothing about us without us. They feed homeless people and hook them up with resources and community. And the ‘they’ was ‘us’ for me both when I was homeless and when I was not. You could get a really good, filling, delicious, satisfying meal there for $1.25 and a cup of coffee for a quarter.  That was way less than other places. If you did not have the money you could sign up to help wash dishes or bus tables—or even be wait staff if you were that brave (not me) –for just one 15 minute shift casually to pay for that meal.  Also you could do another 15 to pay for a friend. Now that is dignity. The place itself was modest but nice to be around and nobody was all “move along.” For me it was a serious Godsend as I was not able to panhandle because too shy for that direct of social contact with strangers so a lot of times if I had a sore throat or something the singing in the streets thing didn’t happen, but I could get fed and treat a friend to lunch no matter what, in a place where we were welcome. 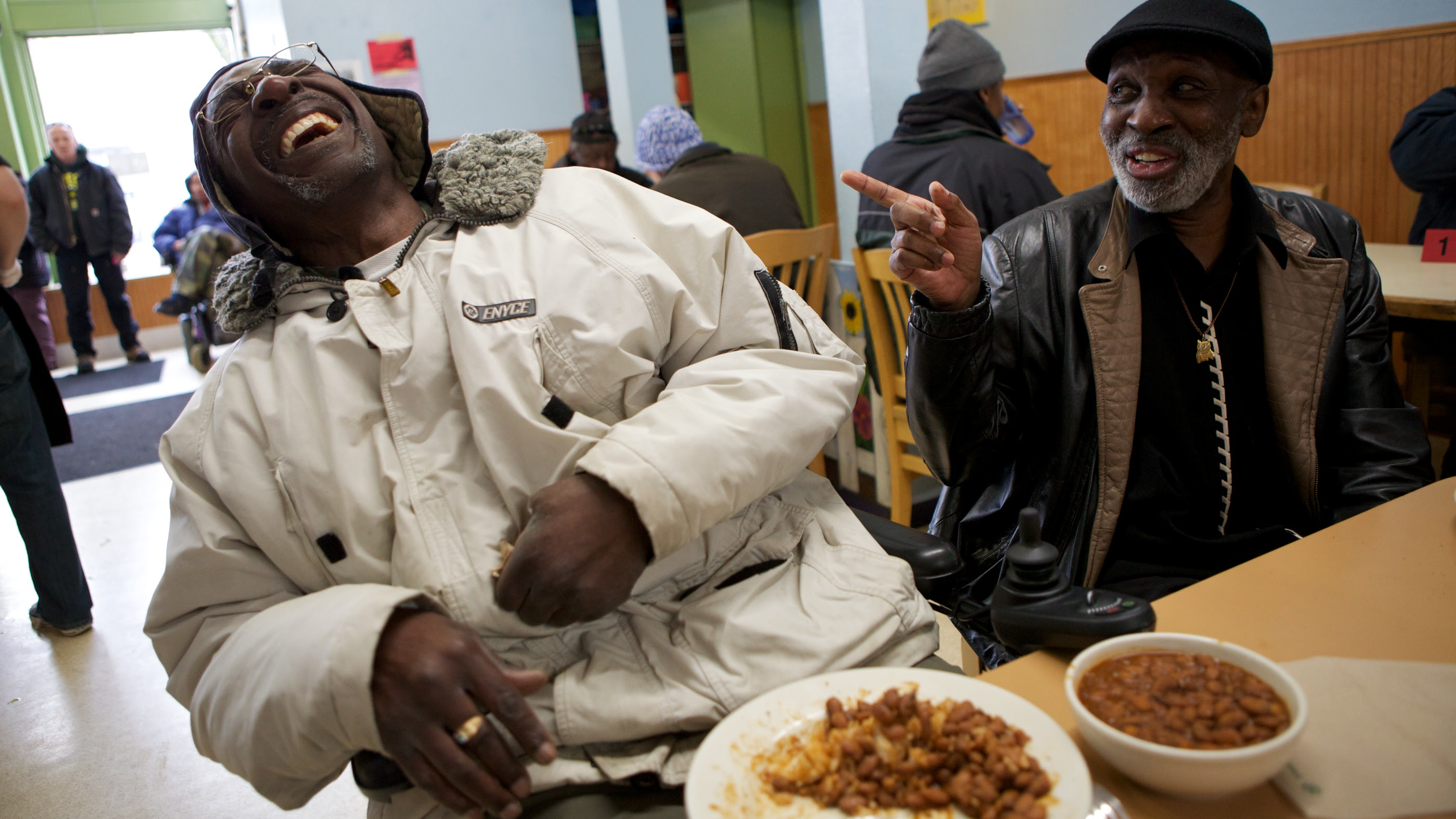 [Image: photo from inside Sisters of the Road nowadays. The cafe has nice wooden chairs now and the lovely old wooden siding still. Two apparently African American men but they could be islanders or African of course, also they could be transmen, I don't know them personally, anyway they are in the foreground and the one who has my favorite red beans and rice in front of him is laughing uproariously with his head thrown back. The one with him is pointing at him with a big smile as if to say "gotcha." The one who is totally laughing has a powerchair which you can see the controls. Other diners of a variety of skin tones, gender presentations, ways of looking, etc. are throughout and the place and people just still seem as welcoming and friendly as I remember.]

Which brings me to this too: It was very rare back then to be able to get vegetarian food, but they always had it in addition to hearty meat dishes. They also had this kick ass Puerto Rican salsa, because one of the steady volunteers or workers was from there and knew how to do it. (People who really worked there for a wage or were steady volunteers did not act better than anyone or better than each other. You could pick them out only because they worked for longer than 15-30 minute stretches.) Nobody sneered at vegetarianism and said, “Beggars can’t be choosers.” I am sorry that so many religiously based organizations at that time (late eighties; I wouldn’t be shocked if it’s the same now) had personnel who liked saying that demeaning bromide when I shyly asked if there was peanut butter at all, but I wasn’t just being picky. My vegetarianism is long-standing and stems from deeply held personal beliefs.  And even if I were just being picky, why rub it in that someone’s life is hard if yours is a bit better and you are allegedly trying to help?

Genny Nelson was the boss of Sisters of the Road at that time and also later when I was more on my feet and came back around (she is retired now). She was there a lot and rolled up her sleeves and pitched in. She had been one of the inventors of it and when inventing it what she and her partner had done is asked around and found out what would be useful and good for actual people and what would not. I do not know if she had heard the slogan “Nothing About Us Without Us” but she sure did live by it and also create an organization that was founded on it, as well as the true meaning of Caritas, which is the root word for “charity,” which, as I said, is the Latin translation for Agape, rendered well in English as unselfish love.

So Sisters of the Road is earmarked for homeless people, many of whom are Autistic and otherwise neurodivergent, partially because a lot of the big alleged charities for Autistic folks do not provide much real life help at all, so good people who want to help others are accidentally throwing their money to the greed machine while the people they wanted to help are left floundering.

The straight up Autism charities that exemplify Nothing About Us Without Us are actually run by Autistics. These are Autism Women’s Network (AWN) and Autistic Self Advocacy Network (ASAN).  Autism Women’s Network is working on getting together some more on-the-ground initiatives, to get money and resources back to the right people who need it. Autistic Self Advocacy Network has created a sea change in the way Autistics are able to see ourselves and come together in action, as well as carve a place for ourselves at policy tables, even at the very highest levels. This has literally changed the world for me and many people I know. I think ASAN is also looking into a grants program. Both of these groups increase our dignity and well-being every day without wasting good people’s money lining greedy pocketbooks or financing harmful ad campaigns or research into preventing us from being born. Both of these groups are bona fide what a charity should be, and growing and doing more every moment of every day with your help.